The following entry is presented by CARE Minneapolis volunteer, Hon. Greg Kishel (ret.), who recently visited Poland to teach English, using the CARE curriculum in his lessons. Judge Kishel offered this essay about his time teaching budgeting in Poland and his account has only been lightly edited for online publication. Thank you, Judge!

This past May—2019–I was faced with a challenge.  My wife and I had agreed to return to the city of Toruń in north-central Poland, as volunteer teachers in a two-week English language camp for Polish teenagers.  Starting in 1995, she and I and our three children had done the camp in various combinations during four scattered years.  Ten years after our first participation together, she and I had come back in 2018 as part of a small group tasked with restarting the camp after a several-year hiatus.  As recent retirees, we finally could have this deep international experience without the stress of absenting ourselves from demanding professional lives.

But the experience in 2018 showed one thing quite powerfully:  over that decade things had really changed with young people in Poland, even more than they had between 1995 and 2008.  Poland’s accession to the European Union, its significant economic growth, the worldwide burgeoning of electronic media, and the ubiquity of cell phone possession had produced a generation of young people whose knowledge of Western Europe and the United States was far beyond what we’d seen in earlier years.

After seeing that, I became concerned that most of the lesson plans I’d developed in the 1990s, and even those from 2008, no longer had the same relevance or appeal to the students of 2018.  But what to do now?  Unlike my camp-faculty colleagues who were career-long educators, I had no intuitive sense of how to engage teenagers in an active two-sided learning process—let alone how to turn on a dime to revive their interest when my preparations were not getting them into the active dialogue in idiomatic English that the camp was to provide.

But then I had a flash—there was one nice prepared vehicle.  The answer was the “Brush Up on Budgeting” module from the CARE program. 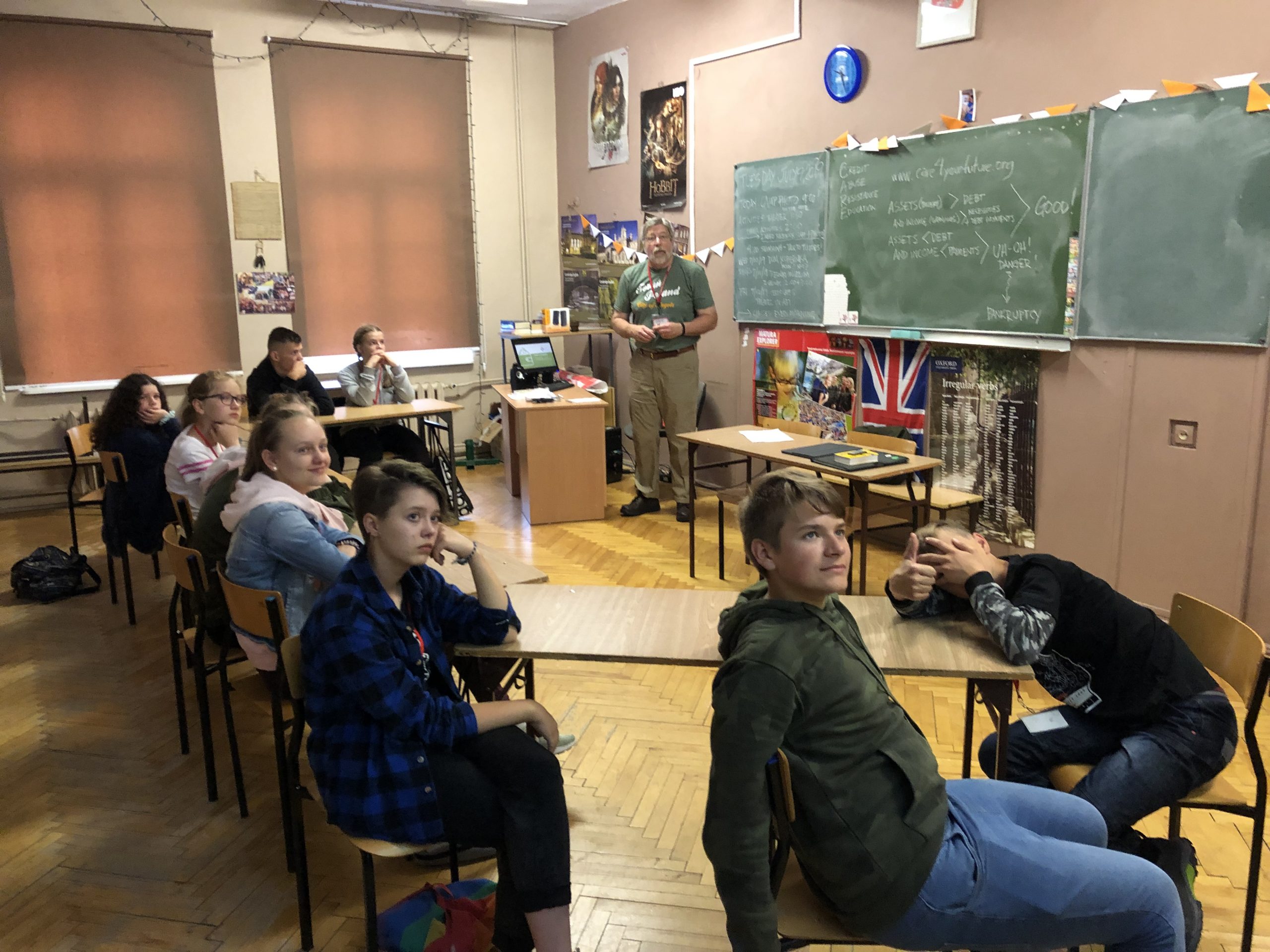 This should have come to me more readily.  Some months after I retired from the bench in mid-2016, our Bankruptcy Section of the Minnesota State Bar Association had revived a local CARE initiative.  (Our previous effort in the mid-2000s had foundered after the financial crisis of 2008 when we all got too busy in the day job.) The chief proponents of the revival were my successor on the bench, Judge William Fisher, and attorney Kenneth Edstrom.  They enlisted me to join the new program.  For over two years now, teams of judges, bankruptcy attorneys, and law clerks have presented several CARE modules in Minnesota. Our main staging vehicle has been the Youth Campus Visit project for local middle-school students run by the Institute for Community Engagement and Scholarship at Metropolitan State University in St. Paul.  After an initial year of experimentation, our presenters adopted the older CARE module on personal budgeting as our primary platform; that was the one that proved most accessible to 7th and 8th graders.

I concluded that a similar unit on money management might spark conversation with young Poles ages 11 to 18.  So, I downloaded the “Brush Up…” graphics and took them with me to XLO (“Secondary School No. 10”), the institution in Toruń that had hosted our camp since 1994.  The Polish members of the camp’s staff and administrators from the provincial government that funded the camp all endorsed my proposal for the topic.  Even XLO’s tech guy, who installed the Powerpoint for the module on my classroom computer, said that he wished that the Polish public schools would introduce concepts of consumer finance and money management to students as early as possible.

Over two class days, I used “Brush Up…” for all six homeroom groups in the camp. Every student enrolled in the camp—about 65 in total—was exposed to the materials and our discussion of their issues and questions.

In general, the students had little difficulty understanding the module’s vocabulary.  (Most of our students in 2018 and 2019 stated that they’d had coursework in English for six to eight years.  Our mission was to get them conversing spontaneously in the style of a native speaker, an aspect of language learning that Polish pedagogy does not emphasize as strongly.)

Whatever their age, almost none of the students professed to have had any classroom-based instruction on personal financial management.  A few—but no more than a few—said that they would be given something of the sort before they completed secondary school.

With that unsown field, I had a few challenges—but not many.  With its opening principle of need-versus-want, “Brush Up…” and its icon-based graphics started discussions that were sometimes quite lively.  I used my standard “need or want?” challenge as to a cell phone. As if to underline the convergence of cultures in the digital era, that got much the same range of answers as it got in St. Paul.  There were always a few insistences on “want!” But then there were more “need”s as I queried about personal security, utility to performance of job duties, and ready Internet access for research for school.  After we hashed that through, I saw familiar patterns of illumination when I eventually suggested, “Depends on how you use it!  Think of all those games and additional apps that can waste your money and time!” (As in the U.S., almost nobody seemed to think their parents used “Find My Friends” to keep track of them.  I didn’t inquire more closely.) 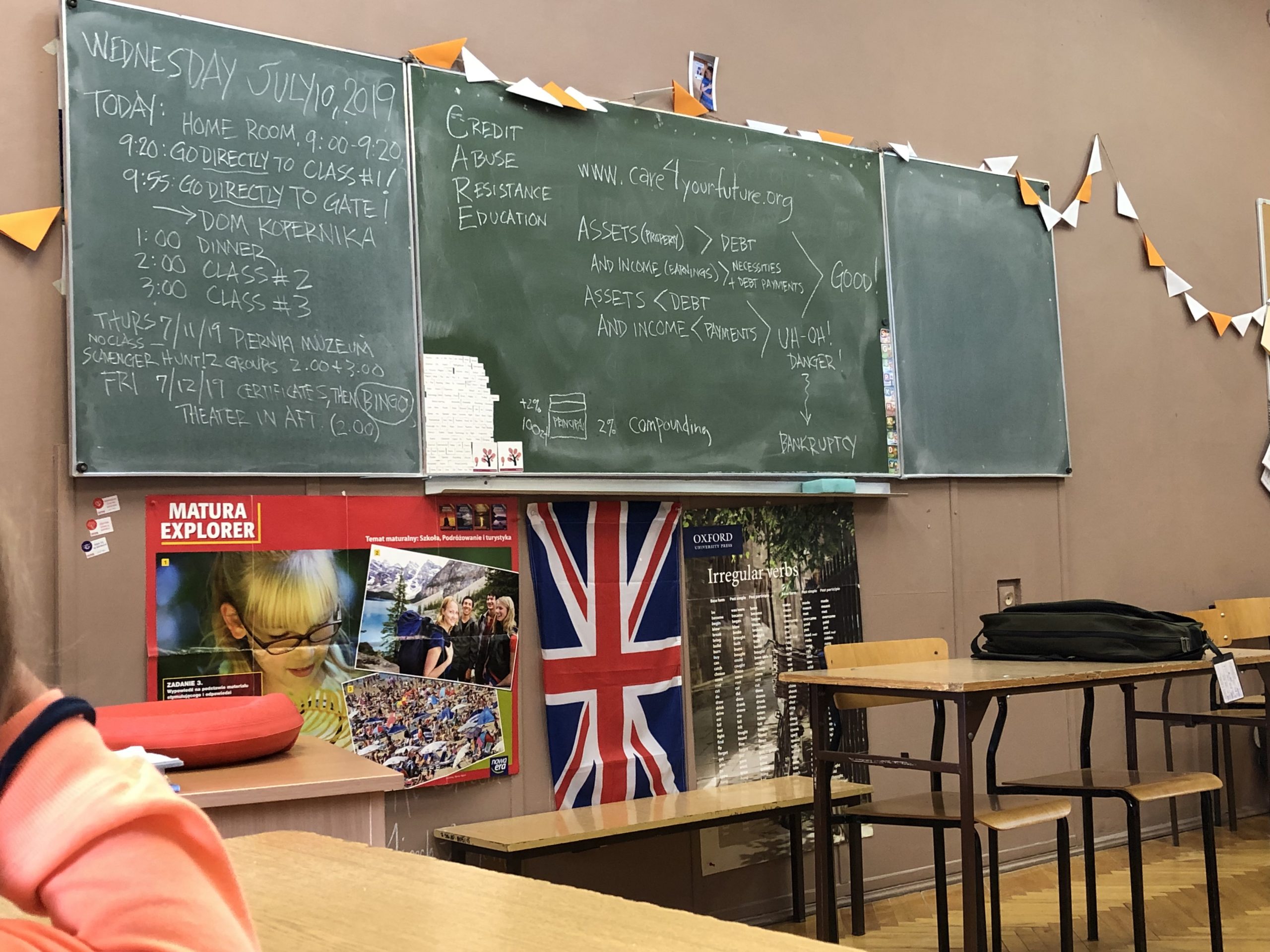 As we got into the accounting-specific part of the module, there some revelations about the life of a young person in 2019 Poland.  Perhaps 10 to 15% of them had earned money by babysitting or running errands.  Virtually none had earned money through the traditional tasks known to young Minnesotans—lawn mowing, yard work, or shoveling snow.  (This, I concluded, was to be expected in a country where the majority of people still lived in flats in multi-unit buildings, everywhere other than smaller rural villages.)

Initially, it was a surprise that only a couple out of the sixty-odd students had employment with a third party. With one or two exceptions, even the older teenagers did not work in a store or restaurant. As nearly as I could tell on inquiry, this reflected larger economics and demography in differing ways.  Most of our students were from mid- to upper-middle-class families.  Probably, parental means better-supported doling out spending money.  Despite the ubiquity of advertising and consumer goods indistinguishable from that in Western Europe or the United States, peer expectations of consumption still did not seem to be as demanding among Polish young people as they are here.  (That’s not to say they might not be catching up.). And, Poland is still coming off a period of high unemployment.  So, it seemed, server and host and bussing positions in restaurants, clerks’ jobs in stores, and the like were generally more the province of young adults than of high-schoolers.

Nonetheless, it seemed that most parents who were doling out spending money on condition of responsibility were demanding some form of accountability.  This, I hope, is where CARE’s instruction in the accounting of income and expenses will be of some help to my young charges—and their parents.  I hope the students heeded my suggestion that budgeting apps for their cell phones could make it easier to manage their finances from the start—and to prove responsibility to their parents.

Looking to the Future

In general, I was pleased that our American-generated CARE content was as accessible to my students as it appeared.  Nonetheless, I did not explore one part of the module’s subject matter, the whole question of coping with the cost of a college education.  The Polish system for young people’s transition to adulthood is much more in the Continental model, where individual students track early toward university and non-university alternatives and much rides on the results of grueling examinations.  The cost of a baccalaureate education appears to be substantially government-subsidized for those who make it through a process of controlled access.  It was beyond the time and scope I could allot to this lesson to explore whether those surmises were accurate—let alone to account for the high cost of American post-secondary education and the Hobson’s choices that American students face in contending with that cost.

My wife and I have committed to returning to XLO for a 2020 camp, all other circumstances then permitting.  After my relative success with CARE’s budgeting lesson, I will most likely go on to the topic of credit and credit cards.  It was far back in 1999 that I first encountered evidence of the VISA system’s appearance in Poland—a handbill passed to me on the street in Toruń that I eventually posted outside my courtroom for awhile.  Credit cards and e-banking are now ubiquitous there.  But I’m quite sure that the current crop of Polish teenagers need to know the deeper story on credit cards as much as their American contemporaries still do.